OBJECTIVE: We evaluated whether the preoperative serum concentration of brain natriuretic peptide (BNP) is a predictor of in-hospital mortality in patients that underwent cardiac surgery.
METHODS: We continuously evaluated 488 patients that underwent cardiac valve surgery or coronary artery bypass grafting (CABG) between January of 2009 and July of 2012. Follow up of these patients were done prospectively for 30 days postoperatively.
RESULTS: Data analysis showed that the overall mortality rate was equal to 9.6%, Receiver Operating Charactheristic (ROC) curve analysis found the optimal cut-off value of BNP equal to 382 pg/mL for overall mortality (AUC=0.73, 95% CI=0.66 to 0.81, P<0.001). Multivariate analysis showed that the value of BNP higher than 382 pg/mL (P=0.033, HR=2.05, 95% CI=1.6 to 3.98) was an independent predictor of overall mortality at 30 days postoperatively.
CONCLUSION: We concluded that the preoperative serum concentration of BNP is an independent predictor of mortality in patients undergoing valve surgery or coronary artery bypass graft.

In the last decade, the interest in the use of brain natriuretic peptide (BNP) levels as a risk stratification tool in patients undergoing cardiac surgery has increased[1-3]. In the clinical setting, risk scoring systems are widely validated and used as the gold standard method of evaluation of risk of perioperative mortality. On the other hand, these systems were proved to be complex with limited accuracy for certain cohorts of patients[4,5]. Consequently, new markers able to stratify risk and predict higher mortality rate in cardiac surgery are being investigated.

In addition to be used as a parameter to assess and validate the prognosis in several clinical situations, the measurement of BNP serum concentration has low cost, is easily performed and highly available, and has good reproducibility[6-8]. Up to this the moment, few studies have evaluated the serum concentration of preoperative BNP as a predictor of mortality in cardiac surgery, mainly due to the heterogeneity of small sample size, making it impossible to consistently assess its relation to mortality[1-3]. Thus, additional studies have become necessary to demonstrate the correlations between BNP levels and mortality in cardiac surgery. In this study, the aim was to assess whether the preoperative BNP can be used as an independent predictor of mortality in cardiac surgery.

The study evaluated 488 patients admitted to the Postoperative Cardiac Intensive Care Unit in the Medical School of Sao Jose do Rio Preto/Hospital of Base for heart valve surgery or coronary artery bypass grafting between January of 2009 and June of 2012. Exclusion criteria included patients younger than 18 years old, with advanced malignancy or who had undergone combined cardiac procedures. Data were collected prospectively by consulting the computerized database Hospital de Base of São José do Rio Preto - SP - Brazil. This hospital is a reference center for the treatment of cardiovascular diseases and serves a region of about 1.5 million people. The study was approved by the Ethics Committee of the Medical School of São José do Rio Preto (Protocol Number 6079/2010) and due to the nature of the study,no informed consent was required.

The data included demographic, comorbidities, degree of left ventricular systolic dysfunction, intraoperative variables and mortality from all causes within 30 days postoperatively. All variables were defined according to the latest guidelines published by the American Heart Association and European Society of Cardiology.

The serum concentration of BNP was measured in the preoperative period immediately before all operations, by the method of electrochemiluminescence using the Siemens ADVIA Centaur equipment (Siemens Medical).

Categorical variables were presented as absolute numbers (percentages) and continuous variables as median and interquartile range.

Statistical analysis was performed with SPSS software (version 20.0). The discriminating power of the value of preoperative serum concentration of BNP to predict mortality from all causes in 30 days after surgery was determined with the aid of statistical C by calculating the area under the ROC curve ("Receiver Operating Characteristic"), with the value > 0.60 considered not determined by chance.

In this study, proportional regression risk analysis of Cox was used to establish the relationship between the dependent variable (mortality from all causes) and the exploratory variables. Single variables associated with mortality (P value <0.05) were considered for multivariate regression analysis. The Spearman test was used to correlate continuous variables when two or more variables were closely correlated, the one with the highest statistical value of Wald was selected for multivariate analysis. Independent predictors of mortality were established for variables with P<0.05 in multivariate analysis.

From January of 2009 to June of 2012, 488 consecutive patients undergoing coronary artery bypass grafting or isolated valve surgery were included in the study. 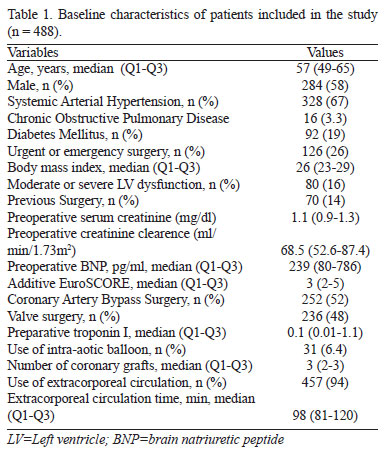 Mortality from all causes at 30 days postoperatively 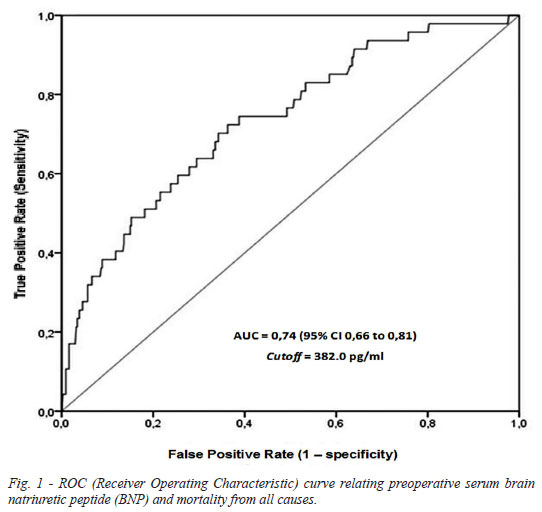 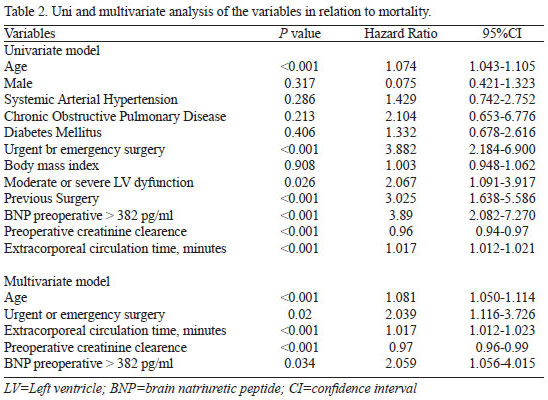 Figure 2 illustrates the 30-day survival probability of patients who were divided into groups according to the BNP values being lower than or equal to 382 pg/ml or greater than 382 pg/ml, respectively, with the values being 95.6% and 82.5 % at 30 days after surgery (P<0.001). 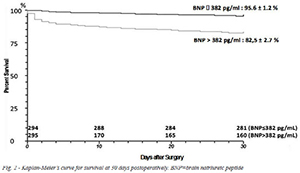 Few studies have described the prognostic significance of preoperative BNP in the heart surgery setting[1-3]. In a meta-analysis recently published the preoperative BNP was evaluated as a predictor of adverse outcomes in cardiac surgery, among 819 relevant studies identified in the literature, only four associated preoperative serum BNP with mortality and of these, only one has examined this relationship with the help of multivariate analysis[1]. In this small study mentioned (n=209), BNP was an independent predictor of adverse cardiac events, described as combined event of death and non-fatal events (malignant ventricular arrhythmia, myocardial infarction and heart failure)[9]. In the present study, we found that preoperative BNP was an independent predictor of mortality from all causes with methodology specifically geared to this goal to become a pioneering study in relation to its results.

Our group believes that the prognostic value of preoperative BNP is due to its ability to measure ventricularhemodynamic changes even in asymptomatic patients[10]. Discovered in 1988, only in 1994 a study was performed to assess the site and mechanism of secretion of BNP, showing that higher BNP levels were significantly correlated with increased pulmonary capillary wedge pressure, increased diastolic and end systolic ventricular volume of the left ventricle, lower left ventricular ejection fraction and a lower cardiac index[11-14]. Consequently, it was concluded that secretion is stimulated by increased ventricular wall stress and correlates with increased cardiovascular risk variables[10,11,15]. Our group believes that this pathophysiological mechanism intrinsically related to secretion of BNP is the explanation for the higher levels of preoperative BNP are independently associated with increased mortality in cardiac surgery.

Score systems are widely used in preoperative risk stratification with emphasis on choosing the best method of treatment according to the risk found, and performed an uniform comparative analysis between different surgeons and centers specialized in heart surgery[16,17]. However, conducts aiming to reduce perioperative risk are rarely adopted based on these risk scores because they are made up of a large number of variables, and do not have a progressive nature to assess pre-surgical procedures[18]. Therapies guided by BNP levels have been effective in reducing hospitalization and death in patients with heart failure[19]. Therefore, BNP can provide a noninvasive indicator to evaluate the effectiveness of perioperative hemodynamic reductions in stress related to blood volume status of these patients aiming at better risk stratification and optimization of surgical outcomes.

This study was designed to assess the association between the value of preoperative serum BNP and mortality in patients undergoing valve replacement surgery or coronary artery bypass graft surgery. Compared to the other existing studies in this area, this study has the highest number of participants with clinically relevant result to demonstrate that preoperative BNP was an independent predictor of the outcome of isolated postoperative mortality in cardiac surgery. However, our study has limitations, such as the fact that it was performed at a single medical center with short-term follow-up.

Further studies are needed to assess the association between preoperative serum BNP and mortality in cardiac surgery, because the data are limited regarding this issue. Our study adds information to the limited literature and suggests that the BNP preoperative serum concentration should be included in all future studies that assess mortality in cardiac surgery as a clinical outcome.

It was demonstrated that the high levels of preoperative BNP were an independent predictor of 30-day mortality after surgery for patients undergoing heart valve surgery or coronary artery bypass graft. This finding raises the possibility that targeted therapy for the reduction of BNP can be effective in reducing mortality in cardiac surgery.

1. Litton E, Ho KM. The use of pre-operative brain natriuretic peptides as a predictor of adverse outcomes after cardiac surgery: a systematic review and meta-analysis. Eur J Cardiothorac Surg. 2012;41(3):525-34. [MedLine]

JAMJ: Analysis and/or interpretation of data; statistical analysis; final approval of the manuscript; study design; operations and/or experiments conduct; writing of the manuscript or critical review of its content