INTRODUCTION: Congenital heart disease is an abnormality in the structure or cardiocirculatory function, occurring from birth, even if diagnosed later. It can result in intrauterine death in childhood or in adulthood. Accounted for 6% of infant deaths in Brazil in 2007.
OBJECTIVE: To estimate underreporting in the prevalence of congenital heart disease in Brazil and its subtypes.
METHODS: The calculations of prevalence were performed by applying coefficients, giving them function rates for calculations of health problems. The study makes an approach between the literature and the governmental registries. It was adopted an estimate of 9: 1000 births and prevalence rates for subtypes applied to births of 2010. Estimates of births with congenital heart disease were compared with the reports to the Ministry of Health and were studied by descriptive methods with the use of rates and coefficients represented in tables.
RESULTS: The incidence in Brazil is 25,757 new cases/year, distributed in: North 2,758; Northeast 7,570; Southeast 10,112; South 3,329; and Midwest 1,987. In 2010, were reported to System of Live Birth Information of Ministry of Health 1,377 cases of babies with congenital heart disease, representing 5.3% of the estimated for Brazil. In the same period, the most common subtypes were: ventricular septal defect (7,498); atrial septal defect (4,693); persistent ductus arteriosus (2,490); pulmonary stenosis (1,431); tetralogy of Fallot (973); coarctation of the aorta (973); transposition of the great arteries (887); and aortic stenosis 630. The prevalence of congenital heart disease, for the year of 2009, was 675,495 children and adolescents and 552,092 adults.
CONCLUSION: In Brazil, there is underreporting in the prevalence of congenital heart disease, signaling the need for adjustments in the methodology of registration.

TGA: Transposition of the great arteries

Congenital Heart Disease (CHD) is an abnormality in the structure or cardiocirculatory function that occurs from birth, even if subsequently diagnosed[1]. It varies in severity, occurring from communications between cavities that spontaneously regress up to major malformations that even require several procedures, surgical or catheterization. It can result in intrauterine, childhood or adulthood death[2].

Globally, 130 million children are born each year. Of these, four million die in the neonatal period, or that is, in the first 30 days of life[3] and 7% of the fatalities are related to CHD[4].

In 2007, in Brazil, 6% of deaths in children under one year of age were by CHD[5]. Among the congenital malformations, cardiovascular abnormalities are the most common cause of infant mortality, 40% under study in São Paulo/Brazil[6] and 26.6% and 48.1% in the US[7,8]. Delays in the development and cognitive deficits are associated with a congenital heart disease of 20% to 30%[9-11].

Hoffman & Kaplan reported a variation in prevalence rate of 4:1000 to 50:1000 births. The highest one is related to the occurrence of low severity injuries that are solved without medical intervention[12].

Study review and meta-analysis on the global prevalence of congenital heart disease included 114 studies, with a study population of 24,091,867 births. The prevalence rate estimated at 9.1 per 1,000 births remains stable over the last 15 years. This corresponds to 1.35 million newborns with CHD each year[18].

In this study, prevalence is the greatness of the event at any given time[19], adopting the coefficient of 9:1000 births as the basis for calculation of CHD in Brazil and in each federal unit.

The scarcity of specific bibliography and reliable statistics on the Brazilian population with congenital heart disease forces the approximation to the international literature, in order to estimate the prevalence of CHD in Brazil and compare it to the official notifications, serving therefore as basis for formulation of public policies, based on more realistic data.

The aim of this study was to estimate underreporting in the prevalence of congenital heart disease in Brazil and its most frequent subtypes.

We adopted for the test under report, the prevalence rate of congenital heart disease equal to 9:1000 births, defined in a review and meta-analysis study for births worldwide [18].

Population and birth registries in Brazil, regions and federated units, were obtained by consulting the Demographic Census of 2010, published in 2012, and made available on the DATASUS/Ministry of Health (MOH) website[20].

Secondary data relating to the distribution by age group, the Brazilian population of 2009, published by the Demographic Census of 2010[20], were divided into two groups: the first with children under 18 years of age and the second formed by adults, aged 18 and more.

The prevalence of congenital heart disease in 2010, recorded in SINASC (System of Live Birth Information), was obtained by consulting the DATASUS/MOH website.

The estimated prevalence of congenital heart disease in Brazil, was generated when the prevalence rate equal to 9: 1000 births was applied to quantitative births.

Estimated prevalence of congenital heart disease was compared with notifications from SINASC/MOH, revealing the disease registration percentage in Brazil and the federal units.

The estimated prevalence of the eight most frequent subtypes of CHD was achieved by applying to the quantitative of birth the prevalence rates per 1,000 births of each subtype, namely: Ventricular septal defect (VSD) 2.62; Atrial septal defect (ASD) 1.64; Persistent ductus arteriosus (PDA) 0.87; Pulmonary stenosis 0.5; Tetralogy of Fallot (T4F) 0.34; Aortic Coarctation (AoCo) 0.34; Transposition of the great arteries (TGA) 0.31 and Aortic Stenosis, 0.22[18].

The CHD prevalence rates among age groups were estimated when applied to population groups their respective relative rates of prevalence[21].

The data were evaluated by descriptive methods using rates and ratios represented in tables. 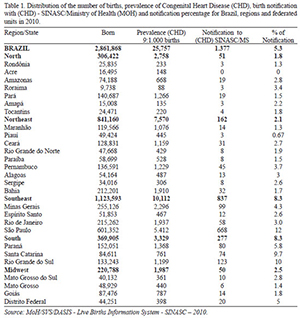 In the same period, 1,377 cases of births with CHD were reported to the Ministry of Health/SINASC, representing 5.3% of estimated for Brazil. The distribution by federal unit is visualized in Table 1.

Pinto Jr et al.[22] propose, in a study on regionalization of Brazilian pediatric cardiovascular surgery, the implementation of a support network for patients with congenital heart disease, of fair range for all regions of Brazil. Therefore, it becomes important to define the prevalence and distribution of the disease and its subtypes for each territory.

The lack of national studies forces the approximation of the numbers with specific international literature and thus, through estimates, it reveals a scenario that best describes the reality.

It is common to find in the scientific literature that large differences in epidemiological calculations, which stems in part of the variation in sample selection in which the studies are performed[12,15,16]. Studies on the prevalence of CHD after the first year of life underestimate the occurrence of the disease in the fetus and newborn, considering that 20% of children die in their first year of life[23]. Another aspect that implies inaccuracies is related to the fact that 30% of CHD can not be diagnosed in the first weeks of life[24].

CHD prevalence rate equal to 9:1000 births, defined in the study review and meta-analysis to births worldwide[18], was defined as basis for calculation of CHD estimates for this study.

The notifications published by DATASUS/MS have shown 1,377 births with CHD in 2010, corresponding to 5.3% of the estimate of 9:1,000 births used for this study.

Therefore, the public policies in this segment are supported by a reality of underreporting. Thus, assumptions of the Unified Health System; as universality, comprehensiveness and equity, principles of health-inducing public policies with quality[25], remain outside of care to this group of patients.

Knowing that 25% of births with CHD require invasive treatment in the first year of life[26], in order to meet the demand, it would be needed 6,439 procedures per year in Brazil. In 2008, however, 1919 procedures were performed[5]. There is, therefore, for this age group, deficit of procedures is about 70%.

A quantitative explanation of congenital heart disease, its territorial distribution and classification by subtypes associated with the determination of risk for disease, allows establishing planning for the health care of this population.

Thus, considering all the variables, it is possible to direct investments equally to this group that, in 2009 amounted to 675,495 children and adolescents and 552,092 adults with CHD, with expected annual growth rate of 1% to 5%, depending on age and the distribution of[21,27] injuries.

Transposition of the gap between standards, Ordinances 1169/GM and 210/SAS-MS[28,29] and the assistance requires political will and planning aimed at improving access to pediatric cardiovascular surgery centers, financing of Cardiology and Cardiovascular Surgery Pediatric; database feeding; promote management for quality and establish continuing education programs[5,6].

Failure to observe these points, which are fundamental in the design and implementation of health care policy for CHD patients, blames the Brazilian system of health care, public and supplementary, to leave outside the surgical treatment of 62% of infants with congenital heart disease, reaching in some regions of Brazil to 76 and 91%[5].

Gomes[30], in an editorial, "the debt to the nation's health: the case of congenital heart disease," translates numbers into words and says:

[...] became untenable the acceptance of the quality of health care of the Brazilians. Felt by the population, but mainly affecting patients, their families, doctors and all other professionals involved, and even more so when it involves children with congenital heart disease, excluded from the basic right of adequate treatment and the chance to be alive.

Facing such problem requires the participation of civil society in the development of social policies and it is mandatory for the elaboration of issues in the social area, the intervention of agents who experience difficulties, either as carriers of disease, either as family components, either as professionals[31].

The calculation of the prevalence of congenital heart disease and their most frequent subtypes was anchored in study review and meta-analysis that proposed to estimate the prevalence of this disease in the world[18]. One of the limitations of this meta-analysis is not cover the entire world population, in addition to using only studies with summaries in English and make use of government records available online, a fact that leads to underreporting error, as demonstrated in this study. In this study we found differences in prevalence rates between the continents, ranging from 1.9 to 9.3/1000 births in Africa and Asia, respectively. The author states that data from developing countries were scarce, and studies often did not include indigenous peoples and tribes.

Records to consider the entire population of births are needed to determine the true prevalence of congenital heart disease.

In Brazil, there is underreporting in the prevalence of congenital heart disease, signaling the need for adjustments in the methodology of registration.

VCPJ: Coordinator of the study; planning and review of the final version; analysis and/or interpretation of the data; final approval of the study; conception and design; study writing or critical review of its contents

RCC: Data survey from IBGE; performance of surgeries and/or experiments; study writing or critical review of its contents; references

WCJ: Text review and translation into english; performance of surgeries and/or experiments; study writing or critical review of its contents

JRCL: Analysis and epidemiological calculations; analysis and/or interpretation of the data; statistical analysis; conception and design of the study

SMF: Supervisor of Master's Degree thesis which led to this study; analysis and/or interpretation of the data

MNOF: Co-supervisor of the Master's Degree dissertation which led to this study; analysis and/or interpretation of the data; study writing or critical review of its contents