Calcified amorphous tumor of the heart consists of a cardiac mass of rare nonneoplastic nature that mimics malignancy and causes symptoms due to obstruction or embolization of calcific fragments. We present a case of tumor 17-year-old young, male, in tricuspid valve, with classic pathological findings. It was preferred to approach for classic median esternotomy, installation of the circuit of extracorporal circulation and right atriotomy, exereses of tumor, DeVega's plasty in tricuspid valve and bicuspidization. The amatomopathological study demonstrated presence of extensive calcification and metaplastic bone areas. The patient had an uneventful hospitalization.

The calcified amorphous tumor (CAT) of the heart consists of a cardiac mass of non-neoplastic nature, rare, that may mimic malignancy and cause symptoms due to obstruction or embolization of calcified fragments [1]. Its exact etiology remains unknown. Cardiac CAT has characteristic histological findings, including calcium deposits, cells of chronic inflammation, hyalinization and degeneration of blood elements [2]. Here we present a case of tumor in tricuspid valve with classic pathologic findings of this rare intracardiac mass.

17-year-old male patient, black, in another outpatient service for tricuspid valve tumor, asymptomatic, without limitation on efforts, comes to our clinic for follow-up case.

From birth, showed cardiomegaly, cyanosis and dyspnea. At three months, during pulmonary infection occurred, at which transthoracic echocardiography was performed, was diagnosed with Ebstein's anomaly. At the time he used aminophylline and digoxin.

Catheterization of the heart chambers at 2 years of age and a new echocardiogram at 4 years were performed with a diagnosis of tricuspid insufficiency of discret repercussion, in addition to tricuspid valve mass invading the right ventricle. The patient underwent a chest CT scan with contrast at five years of age, showing image of metallic density in the projection of the right ventricle, possibly a foreign body because there is no previous history of catheters. At the same time, the patient underwent a heart MRI, noting a marked loss of signal in the tricuspid valve, indicative of fibrosis and/or calcification measuring 16 mm x 16 mm, associated with regurgitation. 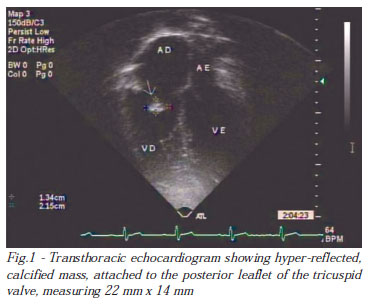 After discussing the case with the surgical team, it was decided to approach.

The patient underwent general anesthesia and median sternotomy. Transesophageal echocardiography in the operating room reaffirmed moderate tricuspid insufficiency due to failure of coaptation (two puffs), with preserved biventricular function. Hyperechogenic image carpeting the anterior leaflet of the tricuspid valve, measuring approximately 17 mm x 7 mm, noting also the tricuspid annulus dilation, measuring 32 mm in diameter. No other changes. Then, installation of cardiopulmonary bypass and right atriotomy were performed, demonstrating calcified tumor attached to the anterior leaflet of the tricuspid, attached septal leaflet and without mobility and failure of central coaptation, in addition to anterior leaflet prolapse (Figures 3 and 4). Resection of the tumor, DeVega repair technique of the tricuspid and bicuspidization were performed. The total time of CPB was 28 minutes, sending the material for surgical pathology. 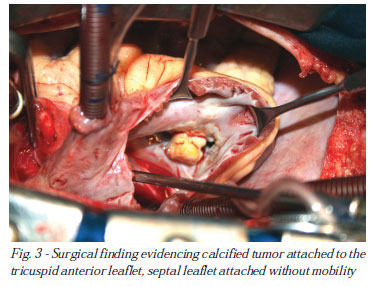 Transesophageal echocardiography in the operating room after removal from cardiopulmonary bypass demonstrated valve repair and the thickening of the anterior leaflet with decreased mobility and preserved biventricular function. The patient left the operating room under use of sodium nitroprusside and dobutamine. The patient underwent transthoracic echocardiography on first day after surgery, which revealed mild right ventricular systolic dysfunction and laminar pericardial effusion.

We performed transthoracic echocardiography on the 90th postoperative day to control, which showed good patient outcomes who followed asymptomatic.

The specimen was stored in formalin and its macroscopic tumor formation configured a round, whitish-yellow and stone-hard consistency, measuring 1.5 x 1.5 x 1.3 cm in major axis. All material was examined histologically after prior decalcification. It was noted the presence of extensive areas of calcification and bone metaplasia. The lesion was considered of non-neoplastic nature, with the definitive diagnosis showing calcified amorphous tumor of the heart.

The pathological findings of this case are characteristic of cardiac CAT. Clinically, stroke is the most common symptom. Reynolds et al. [2] reported 11 cases of cardiac CAT at the Mayo Clinic, all be benign. Ho et al. [1] described a case of similar diagnosis involving much of the left ventricle with myocardial diffuse severe calcification, with the patient being referred for cardiac transplantation due to the impossibility of resection of all affected areas.

The main differential diagnoses of cardiac CAT include cardiac neoplasms, such as myxomas or fibrothecomas. It is a challenge to separate these various possibilities only with the clinical or radiographic findings due to the similarity of symptoms of cardiac masses, including syncope and dyspnoea [2]. According to Lewin et al. [3] although modern imaging techniques, it remains difficult to determine if the neoplastic mass is still in the preoperative period. The calcification present in these cases may guide the diagnosis of primary calcification, metastatic tumors, non-neoplastic calcified processes and cardiac CAT [4]. In this particular case, there is the extreme difficulty of accurate diagnosis even with the depletion of resources and diagnostic work-up, achieving only the analysis of the surgical piece. The preoperative endomyocardial biopsy is limited to cases that involve the masses in the free wall, due to risks inherent to the procedure [3]. Like all major cardiac masses that cause symptoms, the complete excision of these tumors is recommended as definitive treatment [5].

In cases where there is involvement of the ventricular free wall, one should take extra care during the excision, because, according to most authors, resection of more than 40% of the mass involving the wall may be associated with significant ventricular dysfunction . In cases such as the presented herein, with valvular involvement, valve repair is necessary after complete resection of the mass, thus avoiding valve dysfunction.

Cardiac CAT is composed of calcium deposits on amorphous or fibrin-composed materials, a decisive factor in histological diagnosis of this disease [2].

Lewin et al. [3] described a case of cardiac CAT involving the lateral wall of the right ventricle toward the tricuspid valve, the first case of literature with a fatal outcome in the postoperative period.

This was the first case of cardiac CAT at our institution.