Objective: To analyze 34 patients submitted to surgical treatment of patent arterial duct with age beyond 18 years old. Methods: Retrospective data collected from patient's charts with more than eighteen years old, submitted to surgical correction of patent arterial duct between 1997 and 2008 at Instituto do Coração da Faculdade de Medicina da Universidade de São Paulo. Results: The mean age was 28.7 (18 a 53) years and 22 (64.7%) were female. The more prevalent symptom was dyspnea (76.5%). Left lateral thoracotomy was used in 33 (97.1%); the DA was sectioned and sutured in 25 (73.5%) cases and one patient needed cardiopulmonary bypass support. There were eight (23.5%) calcified arterial duct and 12 (35.3%) previous treatment with transcatheter devices were performed. The complication rate was 32%, with one (2.9%) permanent vocal cord palsy. Two (5.8%) patients had residual shunt less than 2mm. Transient left cord voice palsy was observed in 3 (8.8%) The procedure improves functional class (P< 0.0001) and no mortality was observed. Conclusion: In this series, the surgical treatment of patent arterial duct in adults could be done without mortality and low incidence of complications.

Although the ductus arteriosus (DA) is the third most common congenital heart disease [1,2], is now a rare finding in adult patients. Late diagnosis can attributed to lack of symptoms or social and economic factors in developing countries [3].

Although the development of percutaneous techniques, that specifically in the adult population has good results [5] in our country the economic limitations restrict its use.

Thus, surgical treatment should not be neglected and still presents itself as a viable alternative within the therapeutic arsenal for treatment of heart disease in adults.

This study aims to analyze the results of surgical treatment of DA in adults operated at the Heart Institute, Faculty of Medicine, University of São Paulo - FMUSP.

Retrospective study by reviewing the medical records of 34 consecutive patients aged over 18 years, patients with isolated DA, who underwent surgery between January 1997 and June 2008.

The technique employed was the surgical access for left thoracotomy in the 4th intercostal space or minithoracotomy (mini-incision with miopreservation), also performed on the 4th left intercostal space, with respect to the specific treatment of DA, it was performed the section and suture and simple ligation with or without titanium clips. Cardiopulmonary bypass (CPB) followed the service routine.

It was determined the prevalence and incidence of complications, the chi-square test was used to compare the functional class pre-and post-operative. 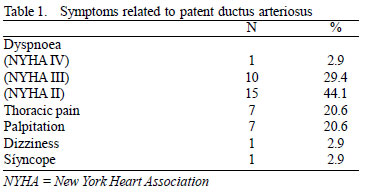 Physical examination detected a heart murmur in 29 (85.3%) patients. Regarding the complementary diagnostic, all underwent echocardiography preoperatively, 19 (55.9%) underwent cardiac catheterization and one (2.9%) underwent magnetic resonance imaging. An initial attempt to occlusion by intraluminal device (coil) without success, was performed in 12 (35.3%) patients. One (2.9%) patient presented pulmonary valve endocarditis.

The CDA section and suturing was performed in 25 (73.5%) patients and in eight (23.5%) it was performed simple ligation with cardiac tape or silk thread, and one (2.9%) of these patients, was also used clipping through titanium clip. In one (2.9%) patient with endocarditis was necessary internal suture of the aortic stump resting on a bovine pericardial patch with CPB and circulatory arrest (TCA) with profound hypothermia, by itself left thoracotomy, lasting 105 min of CPB and 28 minutes of PCT due to injury of the aorta near the inferior angle of the aortic stump.

DA presented with significant calcification in eight (23.5%) patients, five (14.7%) in the aortic stump, one (2.9%) in the pulmonary stump, and two (5.9%) in both. Three (8.8%) patients had intraoperative bleeding (one for aortic stump and two for pulmonary stump) during surgical manipulation with immediate resolution.

Five (14.7%) patients developed dysphonia, and in three was confirmed the left vocal cord paralysis. There was complete recovery of dysphagia in four cases between 4 and 24 weeks and one patient required surgery for persistent dysphonia. These patients had DA with intraoperative diameter around 8 to 11 mm. The technique used in these cases was the section and suture in four (11.8%) and clamping in one (2.9%) (P ns).

Small residual shunt (<2mm) was detected by echocardiography in two (5.9%) patients, both underwent simple ligation of the DA (P ns). Other complications are shown in Table 2.

In five (14.7%) patients, we observed the occurrence of episodes of pain in the wound, the first 2 weeks postoperatively without evidence of infection or inflammation - both controlled by analgesia.

Information on the postoperative outcome was obtained in 28 (82.4%) patients during outpatient or telephone contact over a period varying from 4 to 84 months. There was significant improvement in symptoms (P <0.0001) after surgery, as determined by chi square. Twenty-five (73.5%) patients are in functional class I and three (8.8%) in functional class II (Table 3).

Data refer to 28 of 34 patients in whom it was possible to follow up.

One patient remained with diagnosis and treatment of hypertension and one remains under medical treatment for chronic atrial fibrillation.

The diagnosis of DA in adults can be difficult for the association of heart or lung disease [6], surgical treatment is usually indicated in cases with heart murmur on physical examination, but particularly when there is an occurrence of symptoms related to left-right shunt. In these patients, even when there is significant increase in pulmonary artery pressure or ventricular volume with left ventricular dysfunction, there may not be installed important pulmonary vascular disease, underscoring the need for a full investigation to provide appropriate treatment [5-7] In our study, patients had symptoms of varying degrees of heart failure and heart murmur in 85% of cases.

Patient survival is directly related to the incidence and degree of HF. Campbell [4], studying the natural history of disease, implied mortality of 0.42% per annum during the first two decades of life, 1% to 1.5% in the third decade and 2% to 2.5% in the fourth and at 4% each year thereafter. Thus, a third of patients have died around the age of 40 and 60% before 60 years of life.

Flutter and atrial fibrillation may be related to atrial distension due to left-right shunt contributing to worsening of HF [8]. Other findings are observed: renal dysfunction, systemic and pulmonary embolism [9,10]. So the treatment in some elderly people are conservative, due to associated diseases and high surgical risk [6,8,11].

The intraoperative complication most feared by the injury due to bleeding from the pulmonary or aortic stump related to the presence of calcification [14]. In these cases, we suggest techniques involving CPB, left and hypothermia circulatory support [3], as occurred in one patient in this series. The transpulmonary approach is more appropriate, given the pulmonary stump to be less affected by calcification [15].

In the case of DA with short stump and calcification, we used the simple ligation to decrease the risk of injury. Also, it was associated the lowering blood pressure with vasodilator drugs. Other techniques suggested are the use of clamps supported by Teflon bars or pieces of suture with Teflon and systemic hypotension during dissection and ligation [16-17]. The ductus arteriosus aneurysm is a complication with an incidence of 8% [18] and the suggested approach is to correction with TCA [19]. Aneurysms were not observed in our series, only calcifications.

The damage to the left recurrent laryngeal nerve is uncommon and usually temporary [20]. Zbar et al. [21] found an incidence of 8.8% of the left vocal cord paralysis related to the difficulty of dissection in underweight children who underwent ligation of patent ductus arteriosus. In our experience, five (14.7%) patients had dysphonia in the postoperative period, and was found to vocal cord paralysis in three (8.8%), with spontaneous recovery of symptoms in four patients. One patient (2.9%) had permanent damage. Liang et al. [22] showed a relationship of vocal cord paralysis and left ductus arteriosus with a diameter smaller than 1 cm and a length greater than 12 mm in children, even with percutaneous closure. In our experience, patients with recurrent nerve injury had a DA with more than 10 mm.

Percutaneous treatment is presented as an alternative with good results even in cases of severe pulmonary hypertension [26]. In our series, 12 patients there was previously attempt to closure of DA using coil devices, due to unavailability of the Amplatzer-type prosthesis, which can achieve 100% treatment success [27].

Thus, some authors consider that surgical treatment of DA must be considered obsolete [28]. Chen et al [29], comparing a group undergoing surgery with the other undergoing percutaneous treatment (Amplatzer prosthesis type), observed a lower incidence of complications, hospitalization and persistence of residual shunt. Vila et al. [30], moreover, considered that the video-assisted clipping has cost-effective results than thoracotomy and percutaneous treatment. In Brazil, Pontes et al. [31] used a stent, suggesting that its use in adults allows for greater security in the chaos of calcification, aneurysms or significant comorbidities.

The data obtained in this series showed that we do not consider that the surgical treatment of DA in the adult population should be abandoned. The surgery actually helped improve the functional class (P <0.0001), with a low incidence of permanent complications (2.9%) and no mortality.

In this series of patients, surgical treatment of DA with conventional surgical technique was performed with low morbidity and mortality with no significant improvement in functional class.

16. Thomas EA, Martinez HE, Wilson HE, McSwain HT. A technique for the division of difficult patent ductus arteriosus and report of its successful use in a sixty-year-old woman. J Cardiovasc Surg (Torino). 1965;6(6):509-15.