We report a case of a 29-month-old female child, weighing 12.3 kg, born in Vitória - ES - Brazil. She had had cardiac murmur since she was 6-month-old. The murmur was detected on a clinical examination, however, she was asymptomatic and she was not taking any medication. She was in a good general state with a rosy complexion, hydrated, eupneic to minimum and medium efforts. Her thorax was symmetrical, ictus cordis was palpable at the 4th left intercostal space, the heart rhythm was regular with two clicks, normal sounds with an ejection murmur +/6+ at the middle sternal border, and a fixed splitting of S2. The pulmonary auscultation was normal. Abdomen with the liver located 2 cm from the right costal margin. BS (bowel sounds) were present. Pulses and blood pressures were within normal limits for the age in both upper and lower limbs. Pulse oximetry was 98% at room temperature.

An electrocardiogram showed a sinus rhythm with a rate of 150 bpm. The SÂP at +60º, the PR interval of 0.16 seconds, the QTc of 0.32 seconds, and QRS of 0.08 seconds with an electrical axis indeterminate. Signs of right ventricular overload were seen.

Radiography showed a visceral situs solitus. The cardiothoracic index was 0.54 with a subtle increase of cardiac silhouette (shadow) to the right suggesting enlargement of the right atrium. A discrete bulging of the vascular pulmonary network and free domes of the diaphragm were seen (Figure 1).

Fig. 1 - Radiograph of the chest showing an enlargement of the cardiac area at the expense of the right atrium

An echocardiogram showed partial anomalous pulmonary venous connection to the right pulmonary veins draining to the right atrium and the left veins draining to the left atrium. Patent ductus arteriosus was visualized only by Doppler echocardiography. The aorta and left atrium diameters were 14 mm and 20 mm, respectively. The cross sectional diameter (diastolic diameter) of the left ventricle was 20 mm. The right ventricular systolic pressure was 33 mmHg. The ejection fraction was 77.4% and DD of 0.44.

Cardiac murmurs findings in asymptomatic pediatric patients make us take into account the congenital heart defects with or without hemodynamic repercussion. In the present case, the murmur characteristics, the electrocardiographic and radiological findings suggest a diagnosis of interatrial communication, and as a differential diagnosis, the presence of a partial anomalous pulmonary venous connection must be kept in mind.

Approach by longitudinal median sternotomy with establishment of cardiopulmonary bypass was performed by introducing cannulas into the aorta, superior and inferior vena cava as usual. Once the perfusion was started, the ligature of the patent ductus arteriosus was performed with a double 5-0 monofilament polypropylene thread at the aorta and pulmonary vein extremities. The right atrium was opened with a longitudinal incision parallel to the coronary sulcus. Three openings of right pulmonary veins were found to be connected directly to the right atrium close to the inferior vena cava. The interatrial septum was intact, but its spatial positioning regarding the openings of pulmonary veins was unusual (Figure 2). There were no clear boundaries between the atria. Once the interatrial septum was resected, the pulmonary vein blood flow was redirected to the left atrium through a large bovine pericardial patch (Figure 3) in order to provide the left atrium with a greater volume capacity as well as to reduce the risk of postoperative acute pulmonary edema [1]. As there was a risk to perform a total circulatory arrest, if needed, the patient was submitted to hypothermia of 28ºC, with a myocardial ischemia and perfusion time of 29 minutes and 60 minutes, respectively. The patient had an uneventful postoperative course and was released from hospital on the postoperative day 6 without medication and with a normal echocardiogram. 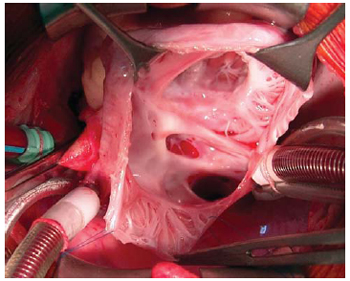 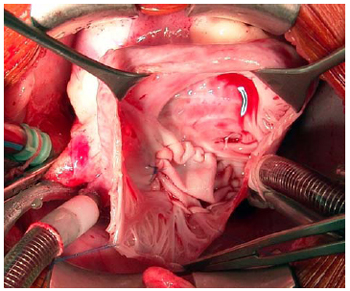