The current study reports on the operative experience of patients with coronary artery fistulas between the anterior intraventricular coronary artery and pulmonary trunk. Of the five patients operated, 60% were women and the ages ranged form 40 to 46 years old. Stress echocardiogram and coronary cineangiography were accomplished for all patients. No deaths occurred in the postoperative period nor were symptoms reported. We believe that the surgical procedure is the first choice treatment for coronary artery fistulas, as it safely and effectively prevents the complications of arteriovenous shunts.

The diagnosis of coronary artery fistulas (CAF) occurs in 0.2% of patients submitted to coronary cineangiography, and is thus the second most common anomaly of coronaries arteries. It is defined as a direct communication between the coronary artery and a cardiac or vascular structure [1].

The first CAF was reported in 1865 by Krause [2]. Generally, the clinical state is silent, but when it becomes apparent, it is similar to obstructive coronary disease but the coronary arteries remain free of obstruction. Diagnosis is made in the cardiological evaluation. The symptoms are directly proportional to the caliber, size and fistula connection with, in some cases, it being identified in young patients. CAFs can occur in isolation or as multiples. In isolation they are more common with the right coronary artery being involved in 50% of cases. This disease can cause congestive heart failure with patients presenting all four functional classes as defined by the New York Heart Association (NYHA), as well as, associated congenital cardiac anomalies. The first successful surgical correction was reported by Björk & Craaford, in 1947 [3].

Our objective is to report on the surgical treatment of five patients with CAF between the anterior intraventricular coronary artery and the pulmonary trunk.

Five patients with CAF between the anterior intraventricular coronary artery and the pulmonary trunk were submitted to surgery after diagnosis by coronary angiography (Figure 1). Sixty percent of cases were women and the ages varied from 40 to 46 years old. All patients presented with clinical symptoms of obstructive coronary disease with only one patient evolving to congestive heart failure (Functional Class III). Patients took beta blockers, calcium channel blockers and diuretics, without improvement of the symptoms. For two patients, electrocardiograms (ECG) demonstrated ischemic alterations but the serum enzymes, CKmb and cardiac troponin I, were normal. Stress echocardiograms identified ischemia in three patients. 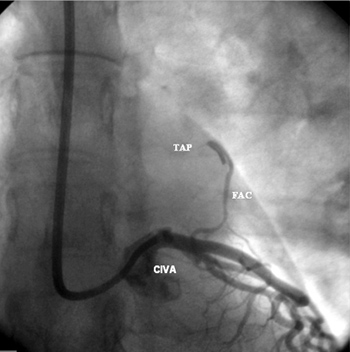 The patients were operated on by median sternotomy, followed by inverted T pericardiotomy. A cardiopulmonary bypass was used together with bicaval drainage and anterograde or retrograde tepid, low-volume blood cardioplegia.

Longitudinal arteriotomy was performed in the pulmonary trunk. The ostium was closed using a bovine pericardium patch and 4.0 prolene sutures in all procedures. Following this, leakage of the retrograde blood cardioplegia, which is an efficient test in the intraoperative period, was evaluated. All procedures were uneventful.

Coronary angiographic studies were performed in the postoperative period, to check for fistulas and residual "shunts" (Figure 2). 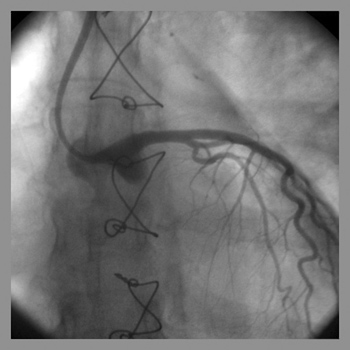 Fig. 2 - Coronary angiographic studies in the postoperative period to check for fistulas and residual "shunts"

There were no deaths in the immediate and late postoperative periods and the patients remain asymptomatic. Written consent forms were signed by all the participants in this study.

In truth, anomalies of the coronary system are rare; studies of patients submitted to coronary angiographic evaluations demonstrated anomalies in 0.3 to 1.3% of the cases [1]. Fistulas of coronary arteries, when present, have symptoms similar to obstructive coronary insufficiency, with stable angina in most cases. However, in a study of young patients, 41.2% presented with stable angina. The variations in the intensity of the symptoms occur proportionally to the caliber, to the number of fistulas and depending on the connection with the heart chamber [4,5].

The clinical state depends on the blood flow through the fistula and on its location. The clinical manifestations are heart failure or dyspnea on effort. When coronary flow steal occurs it presents as precordialgia, sometimes, causing ischemic alterations at electrocardiography [1].

Infective endocarditis and endoarteritis are common in these patients depending on the location of the fistula. Additional to congestive heart failure, dilatation and general hypokinesia of the left ventricle can be observed by echocardiography [1].

Coronary angiographic studies are very important, as, apart from confirming the diagnosis, they provide an idea of the coronary circulation anatomy, the fistula location and the diameter of the artery involved.

In respect to the therapeutic options, clinical treatment is based on preservation of the hemodynamic status by reducing the congestion, diminishing the myocardial contractility tension and, in some cases, improving the contractile force. The use of digitalis or dobutamine is indicated for children with heart failure and this may be associated with diuretics in the congestive phase. Beta blockers or calcium channel blockers function by reducing oxygen consumption, eliminating ischemia and the use of antibiotics for prophylaxis of infective endocarditis. However, optimization of clinical treatment, in some cases, does not improve the symptoms [1,6].

Percutaneous transcatheter embolization (PTE), considered an efficient alternative as it is less invasive compared to surgery, presents limitations. Even though this alternative is often used, a study, comparing the two procedures, demonstrated that the safety and effectiveness of surgery is 100%, as confirmed by coronary angiographic studies. Another study of adult patients with CAFs to the pulmonary artery demonstrated the efficacy of the surgical treatment over a follow-up period of up to seven years, without morbidity and mortality [5,8].

Surgery using cardiopulmonary bypass and myocardial protection has become the safest procedure to close the fistula opening, particularly when patients present more serious clinical conditions or access to the ostial location is difficult. Efflux should be evaluated by retrograde blood cardioplegia through the fistula opening in the intraoperative period to confirm the success of the surgery and also to help to identify the ostium when it is difficult to locate [9]. In Brazil, Groppo et al. [10] published their experience in surgeries of this type and reviewed publications on CAFs, demonstrating the low morbimortality rate.

Surgical treatment of CAFs safely and effectively prevents complications of arteriovenous shunts and should be considered for all patients where optimal clinical treatment is ineffective, even though a percutaneous procedure does exist.