The utilization of the internal thoracic artery (ITA) is common in coronary artery bypass grafting surgery (CABG) [1,2]. The utilization of ITA for the anterior descending artery is associated to higher patency and greater survival than the use of saphenous vein grafts [3,4]. This arterial conduit can be used pediculated, skeletonized or as a free graft. Its use as a free graft or pediculated requires direct dissection by electrocautery, however, this technique implies much injury to the retrosternal region that may result in serious complications, including sternal infection, respiratory dysfunction, thoracic pain and paralysis of the diaphragm [5-7].

The ITA skeletonization technique has been shown to preserve residual sternal flow, reducing dissection injuries and, consequently, reducing the incidence of infection [8]. Thus, the use of skeletonized ITAs has been praised as a form of decreasing postoperative morbidity [9]. The classical technique of ITA skeletonization consists in the dissection of the artery using scissors and occluding intercostal branches using metal clips.

Higami et al. [10] and Lamm et al. [11] introduced the ultrasonic scalpel for skeletonized dissections of the ITA, with the objective of decreasing the time of dissection and injuries caused in the conventional technique.

The objective of this work is to report the experience of the authors with skeletonized dissection of the ITA utilizing an ultrasonic scalpel, stressing the technical reproducibility and the results obtained.

In the period from January 2000 to October 2006, 188 consecutive patients were submitted to CABG using skeletonized ITA grafts dissected using an ultrasonic scalpel. Seventy-one (37.8%) patients were female and 117 (62.2%) male. Their ages varied from 28 to 81 years old (mean 59.4 ± 9.5 years old) with 57 (30.3%) patients older than 65. Relevant preoperative data such as diabetes mellitus and chronic obstructive pulmonary disease are listed in Table 1. 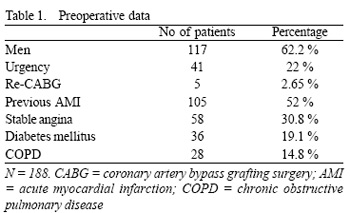 The pulmonary arterial pressure was continuously monitored using a Swan-Ganz catheter. Additionally, routine monitoring was performed of the mean arterial and central venous pressures by cardioscope, the urinary outflow and pulse oximetry. A thermal mattress was used to assist the cooling or heating of patients during the surgery. Tranexamic acid (Transamine) was administered at a dose of 50 mg/kg for all patients after anesthetic induction. In patients submitted to cardiopulmonary bypass (CPB), anoxic arrest of the heart was achieved with administration of cold blood cardioplegia at the aortic root; topical ice was not used in the pericardial cavity. All the patients were prescribed oral diltiazem for the first six postoperative months. The study was approved by the Ethics Research Commission of the institution and complied with the norms of the declaration of Helsinki.

The Ultracision Harmonic scalpel (Ethicon Endo-Surgery, Cincinnati, OH) was used with a 5-mm HS2 manual applicator and curved or hook-type blades. The scalpel produces lengthwise motions at 55,500 cycles/sec or 55.5 kHz with heat emission of between 50ºC at 60ºC at the diamond tip during coagulation.

Median longitudinal sternotomy was performed with rigorous hemostasis, which facilitated ITA dissection; electrocautery and bone wax were used always when necessary for hemostasis. After dissection of the mediastinal pleural reflection and opening of the endothoracic fascia using delicate scissors and clamps, as close as possible to the adventitious layer of the ITA, the entire artery and satellite veins are accessed (Figure 1). Artery displacement and exposure of the intercostal vessel are carefully achieved using scissors or a fine spatula (sculptor) - Figure 2. We use level 3 USS power. The intercostal branches are coagulated for 2 to 3 seconds and sectioned as far from the arterial wall as possible (at least 1 mm from the ITA) (Figure 3), so that adjusted protein coagulation of the branches is possible and not to damage the ITA trunk [10]. We adopted the hook-type blade and considered level 3 ideal, because it presented good coagulation with a slower cut. Coagulation of venous vessels was avoided. The ITA was dissected from its distal bifurcation in the phrenic muscle and superior epigastric artery to its upper portion near to the first rib (Figure 4). After ITA dissection, gauze soaked in papaverine solution was wrapped around the entire artery. 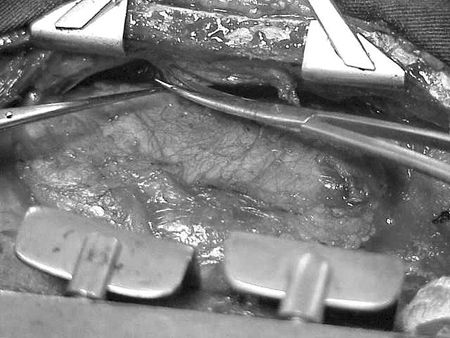 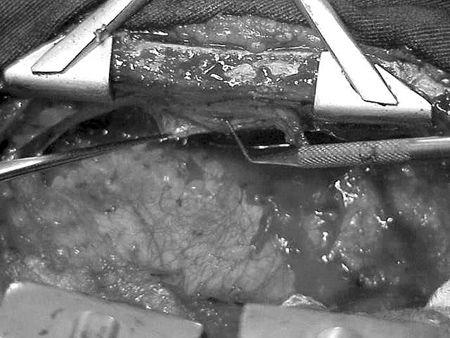 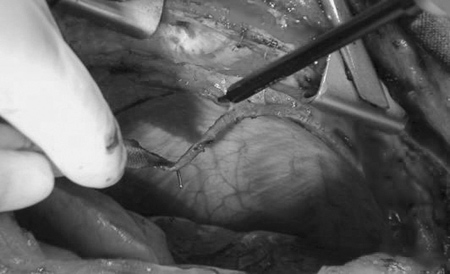 Fig. 3 - Coagulation and sectioning of the intercostal veins with the ultrasonic scalpel 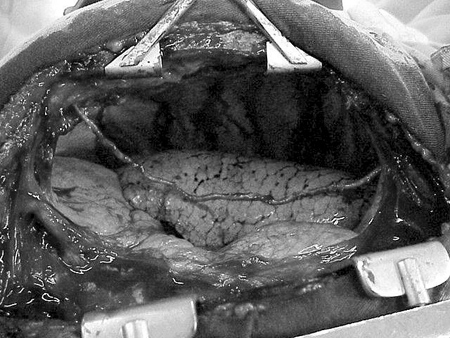 After systemic heparinization at a dose of 4 mg/kg weight and before establishing CPB, the distal part of the ITA was occluded using a clip and sectioned. After sectioning, the free blood flow without resistance was measured over one minute using a 100mL container and the arterial pressure of the patient was maintained at around 70 mmHg. After flow measurement, hemostasis of the graft was performed using metal clips, when necessary.

At the beginning of the series, there was a case of an injury involving cutting the ITA which was then excluded from the study. Blood loss during dissection was very low. Significant vasospasms did not occur and intraluminal manipulations for ITA vasodilatation were unnecessary. It was observed that coagulation of venous vessels using the USS is not very efficient and that it is important to avoid handling these vessels. In a few ITA, occlusion of intercostal branches using clips was necessary due to bleeding.

In five patients (2.6%), associated procedures were performed including aortic valve replacement (1.06%), mitral valve replacement (0.53%), left ventricular aneurysmectomy (0.53%) and the Bentall-de Bono procedure (0.53%). In 181 patients (96.27%), the left ITA was anastomosed in the anterior descending coronary artery. The two internal thoracic arteries were utilized in four (2.12%) patients. The radial artery was used in eight (4.25%) patients. The left ITA was used sequentially in six (3.31%) individuals. In this series, eighteen (9.6%) patients were operated on without the use of CPB.

Two (1.06%) patients presented with temporary hemidiaphragmatic paralysis. There were no occurrences of infection in the sternotomy (superficial, mediastinitis or osteomyelitis). One patient, who was submitted to CABG associated with aortic valve replacement, was re-operated in the immediate postoperative period due to blood dyscrasia. One hospital death occurred due to left ventricular insufficiency of a patient operated during the acute phase of myocardial infraction.

Recent studies have demonstrated that collateral circulation to the sternum is preserved when skeletonization of the ITA is used. The division of collateral braches utilizing clips and scissors preserves the sternal collateral perfusion through intercostal and muscle branches [12]. The use of electrocautery for the pediculated dissection of the ITA may destroy any possibility of maintaining the sternal collateral circulation [8,13] and it may be responsible for the higher infection rate in diabetic patients [9]. A comparison between the use of pediculated and skeletonized ITAs has been carry out by several authors and recently summarized by Athanasiou et al. [6] in a meta-analysis that emphasizes the main advantages of skeletonization, such as a lower sternal infection rate and longer grafts thus simplifying management of sequential grafts. The free blood flow can be considered satisfactory when compared to other studies [6], stressing that there was no intraluminal manipulation of vessels.

Higami et al. [10] presented histological results of tissue submitted to USS, demonstrating its safety when used at a distance of more than 1 mm from the vessel; less than 1 mm may cause slight injuries in adjacent tissues. With coagulation resulting from collagen molecule degradation, the emanated heat is around 50ºC to 60ºC. In this study, microscopic analyzes were not performed although they are necessary to better evaluate the method. Lehtola et al. [7] and Yoshikai et al. [24] demonstrated, by electronic microscopy, that endothelial injuries of the ITA did not occur when USS was used. Experience derived from endoscopic surgery shows that the method is safe in vessels of up to 5.0 mm. Our experience was with vessels smaller than 3.0 mm, agreeing with the observations reported in the user's manual provided by the manufacturer of the USS. One limitation of the USS is its utilization in venous vessels; its use in this type of vessel or in surgical injuries provoked during at dissection should be avoided.

Definitively adopted in endoscopic surgery, the USS was an important technological breakthrough for modern surgery. In conventional surgery, however, we feel the need for a more delicate instrument in respect to the applicator and the blades. Nevertheless, it is possible to skeletonize the ITA with the USS causing the minimum amount of injury and without the necessity of using metal clips, that in spite of their qualities can at any moment make the surgical process more difficult (collateral vessel injuries or excess of clips in the region at be anastomosed). The final aspect of ITAs skeletonized using the USS is very similar to a classically skeletonized artery, however, the time required for dissection seemed shorter to us, as initial occlusion of the ITA branches was unnecessary. Also the minimal surgical injury that we observed in the retrosternal region by macroscopy should be stressed.

In this series, only two patients, due to the return of symptoms suggestive of angina, were re-studied by cinecoronariography in the late postoperative period which demonstrated that the ITAs were patent. The postoperative cinecoronariography was not performed in a systematic way in this study thus this number is not statistically significant. However, authors such as Higami et al. [25] have demonstrated, by angiographic studies carried out in the postoperative period, that there are no significant differences related to the dissection technique in relation to graft patency. Diaphragmatic paralysis and a cutting injury of one graft occurred at the beginning of our series.

In our experience a good final quality of dissected vessel was observed by macroscopic analysis with apparently preserved residual circulation in the retrosternal region. Among the known advantages of skeletonization, the ones most frequently observed in this study using USS were the short time for ITA dissection and the need of few metal clips. Although the study requires better microscopic analysis and evaluation of vessel patency in the postoperative period, preliminary results suggest that the utilization of USS is reproducible and can represent an option for its systematic use for ITA dissection.