A full-term male patient weighing 3.2 kg at birth returned to the hospital at three months of age suffering from fatigue while breast-feeding, episodes of dyspnea and was diagnosed with a complex heart disease with pulmonary hyperflow. The patient was submitted to bandaging of the pulmonary trunk in the Heart Institute of the Hospital das Clinicas, University of São Paulo Medical School (INCOR - HCFMUSP). At five years of age, with 18 kg, after abandoning medical care, the infant returned to our service with moderate cyanosis and a complaint of fatigue during moderate exercise. The heartbeat was rhythmic with a normophonetic sound and 3+/6 systolic murmur at the medial left and high right sternal borders. Pulmonary auscultation was normal and the abdomen showed no changes. The arterial pressure and peripheral pulses displayed no real differences and the peripheral saturation was 74%. 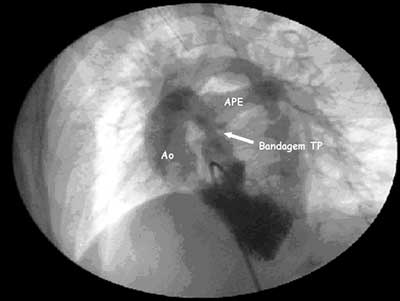 Fig. 1 - Coronary cineangiography demonstrating adequate bandaging of the pulmonary trunk (TP), anterior aorta (Ao) and left pulmonary artery (APE). In this projection it is impossible to adequately see the right pulmonary artery which also presented with a satisfactory diameter for surgical correction 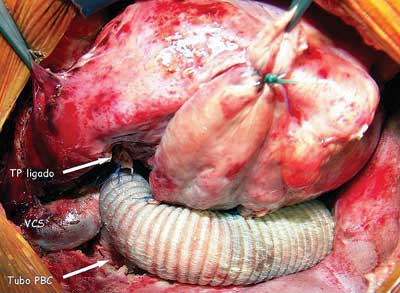 The electrocardiogram showed sinus rhythm with a heart rate of 80 bpm. The SÂP was +60 with an overload of the right atrium (RA), a spiked P wave of 3 mm at D2 and AVF and a PR interval of 0.20 seconds. The QRS complex axis was + 30º. Additionally, a delayed voltage transition of the QRS complex on the horizontal axis characterized by a slow R wave which became progressively larger starting at V3 and a slow S wave becoming progressively smaller starting at V3 were also observed. The QRS was 0.12 seconds and the QTc was 0.42 seconds.

The radiogram evidenced visceral situs solitus, levocardia and a cardiothoracic index of 0.66. Moreover, the right and left atria were enlarged and there was a double contour in the right hemithorax and the left bronchium deviated upwards showing pulmonary vascular prominence. The diaphragmatic domes were free.

The echocardiogram identified situs solitus in levocardia with a normal venoatrial connection but with a univentricular-type atrio-ventricular connection with a double inflow tract to the main left-type ventricle and the ventriculo-arterial connection discordant (transposition of the great vessels). There was slight regurgitation of the atrioventricular valve but the left atrioventricular valve was normal. Additionally, there was a significant interventricular shunt (16 mm) and the bandaging of the pulmonary trunk was seen showing a pressure gradient of 80 mmHg by Doppler echocardiography. The ejection fraction of the main ventricle, measured by the Simpson method, was 69%. The pulmonary arteries had diameters of about 10 mm.

The approach was achieved by median transsternal thoracotomy with extensive dissection of adherences caused by the prior bandaging of the pulmonary trunk. Sacks for the right atrium and the innominate vein were prepared. Total heparization of 4 mg/kg was initiated and a common venous cannula was used for the veno-atrial shunt with ligation and sectioning of the azygos vein, anastomosis of the superior vena cava to the right pulmonary artery was achieved using polydioxanone 6-0 sutures [1]. Similarly, a derivation between the inferior vena cava and the right atrium was established using another venous cannula with a larger diameter. A number 19 corrugated bovine pericardium tube was implanted between the inferior vena cava and the pulmonary artery (Figure 2) and the Fontan-type operation was completed with an extracardiac tube without the use of cardiopulmonary bypass [2,3]. The pulmonary trunk was also ligated using cardiac tape. In the immediate postoperative period, the infant presented with metabolic disorders and consequent atrioventricular block 2:1, requiring a temporary pacemaker and high doses of inotropic agents. The patient evolved with low output syndrome, acute renal insufficiency treated with peritoneal dialysis for 6 days and behavior disorders due to bad brain perfusion with a electroencephalogram identifying grade II diffused slowing in the brain electrical activity. The patient was treated for 32 days in the intensive care unit and was released from hospital after 54 days of hospitalization in normal clinical conditions and with normal complementary examinations. The patient was taking diuretics and warfarin.