Objective: To present the crossed papillopexy technique and its initial results in the preservation of papillary muscles in mitral valve replacement and ventricular remodeling surgeries for heart failure (CHF). Method: Ten patients, 70% male, with ages between 15 and 75 years old (mean 44.4 ± 18.7 years old), suffering from rheumatic mitral valve disease (50%), mitral valve prolapse (10%) or dilated cardiomyopathy (40%), were studied. After opening the left atrium and adequate exposure of the mitral valve, the anterior leaflet already free of its annulus fixation was centrally divided and each half, with its cordae tendineae complex fixed to the commissure on the opposite side. Following this, mechanical (seven cases) or biological (three cases) prostheses were implanted using single sutures in the valve annuli, with reduction of the mitral valve annulus for better ventricular remodeling in CHF cases. Results: All patients were discharged from hospital in good clinical conditions. Additionally all presented with great improvement in the cardiac performance at the end of the first month of follow-up, with significant reductions in the left ventricular and left atrium systolic diameters (p<0.05) and mean increases in the left ventricle ejection fraction of from 46.7 to 56.4 % (p<0.05). Conclusion: The crossed papillopexy technique in valve replacement surgeries for mitral valve lesions and CHF presented significant increases in the left ventricular function and improvement of ventricular remodeling in the studied postoperative period.

The functional importance of the papillary muscles was highlighted in 1956 with the studies of Rushmer et al. [1,2] demonstrating that in the initial phase of systole the papillary muscles cause shortening of the long axis of the ventricles, increasing the diameter of the base, the tension in the walls and consequently the systolic efficacy and ejection.

Lillehei et al. [3] in 1963, based on Rushmer's physiological hypotheses, performed the first replacement of the mitral valve, preserving the papillary muscles and the chordae. Their results confirmed the functional importance of the subvalvar apparatus, showing a significant reduction in operative mortality of patients operated on by the team. These results, however, were immediately contested by Bjoerk et al. [4] and Rastelli et al. [5] in independent studies. However, after the results of Carpentier [6] and stimulated by the studies of Miller et al. [7] and David et al. [8-11], mitral operations with partial or total preservation of the cuspids and papillary muscles continued [12,13].

Papilloplexy used by Lillehei et al. [3] constituted in implanting a ball-type prosthesis (Starr-Edwards Model), without removing the cuspids or removing just the anterior cuspid with the preservation of the posterior cuspid.

The first operations attempting to also preserve the contribution of the anterior papillary complex were performed and reported in 1987 [14,15], with the subvalvar inversion of the cordae, by fixing a segment of cuspid to the top of the opposite papillary muscle, with or without the preservation of the posterior cuspid.

Miki et al. [16] in 1988, described a technique of papillopexy with central sectioning of the anterior cuspid in two halves, fixing each half to its homo-lateral commissure.

Buffolo et al. [17] and Puig et al. [18] successfully employed this technique in mitral valve replacement surgeries in patients with significant heart failure, giving an accentuated improvement in the functional recovery, and the latter team fixed the papillary muscles with traction above the valvar plane. Bastos et al. [19] also used the Miki technique [16] in valve replacement of patients with heart failure.

Based on previously reported results using chordae tendineae and papillary muscle inversion in mitral valve replacement surgeries, we started to use the new crossed papillopexy method, with the object of the current study to describe the technique, analyzing the initial results of the preservation of the papillary muscles in mitral valve replacement and ventricular remodeling surgeries in the treatment of heart failure (CHF).

After approval of the Medical Ethics Commission, ten patients who were submitted to mitral valve replacement surgery were studied. Seven (70%) of the patients were men, and the ages varied between 15 and 75 years (mean 44.4 ± 18.7 years), with 50% suffering from rheumatic mitral valvar dysfunction, 10% from mitral valve prolapse (10%) or dilated myocardiopathy and 40% from CHF (Table 1).

After left atriotomy and adequate exposure of the mitral valve, the anterior cuspid was excised from the annulus and centrally spilt into two halves with its chordae tendineae complex, fixed to the opposite commissure by its medial end (Figure 1).

Subsequently, mechanical valvar prostheses were implanted (model St Jude Nº 27) in seven patients and porcine bioprostheses in three cases (model Labcor; numbers 27, 29 and 31) fixed to the valvar annulus by means of individual sutures, with a reduction in the size of the mitral valvar annulus to improve ventricular remodeling in the cases with CHF. The surgeries were performed under moderate hypothermic cardiopulmonary bypass, using blood cardioplegia with potassium (25mEq/L).

The ventricular function was evaluated using the Teichholz method [21] with ultrasonographic examination performed in the preoperative period and on the thirtieth postoperative day. For statistical analysis, the Wilcoxon's test was utilized, with a level of significance established with a p-value < 0.05.

Neither deaths nor reoperations occurred in the present series. The crossing of the papillary muscles (Figure 2) did not interfere in the functioning of the implanted valvar prostheses nor did it obstruct the left ventricle outflow tract (Figures 3 A and 3 B), making ventricular function recovery possible, with a mean increase in the left ventricle ejection fraction of from 46.7 to 56.4% (p-value < 0.05), from the preoperative to postoperative periods (Table 2).

The debate about the importance and efficiency of preserving the chordae tendineae and papillary muscles still continues, with different conclusions still being reported in the most recent publications, such as the one by Yun et al. [22], concluding there are advantages and the one by Dancini et al. [23], suggesting there are no benefits seen using the procedure. However, until now there have not been any studies proving the results are worse with the preservation of the valvar structures.

Thus, it is possible to see that preservation of the papillary muscles, independently of the technique adopted, favors, or at least, does not hamper recovery of the ventricular systolic function, however, when the potential for postoperative negative ventricular remodeling is analysed, crossed papillopexy offers optimized geometrical support, reducing the side-to-side displacement of the bases of each papillary muscle and, consequently, of the respective ventricular wall. Associated with the reduction in the diameter of the mitral annulus, in dilated myocardiopathy with CHF, this may optimize the benefits of ventricular remodeling.

Normally, with the closure of the valvar cuspids, the anchoring site of the chordae is dislocated to the center, so that, during diastole or systole, the same pressure that projects the cuspid to the atrium is transmitted to the ventricular walls. When the papillary muscles are transferred from the central position of the free border of the cuspid to the homo-lateral commissure, they become perfectly parallel to the ventricular wall, allowing a greater displacement of the ventricular wall and causing undesired sphericity. Also, with aortic valvar regurgitation, the potential for dilatation and harmful ventricular diastolic remodeling is much greater (Figure 4).

Crossed papillopexy, with the implantation of each half of the cuspid in the opposite commissure (by its medial or lateral end for the most adequate adaptation of the ratio between the diameter of the valvar annulus and the length of the cuspid segment with the respective chordae), reduces the displacement angle of the bases of the papillary muscles, guaranteeing better protection against passive ventricular diastolic dilatation (Figure 5).

When, because of calcification, accentuated fibrosis or infection, the preservation of the tendineae chordae to fix the papillary muscles is not possible, the use of bovine pericardial strips or chords preserved in glutaraldehyde [24], or PTFE thread [25] also give good results.

In favor of papillopexy, is the natural principle of the preservation of the anatomic structures and all possible physiology of the operated organs. Moreover, utilization of the posterior mitral cuspid when possible is advisable, because this reinforces the support of the sutures around the posterior section of the valvar annulus where it is more fragile.

Special discussion is necessary to confirm the importance of the papillary muscles in mitral valve replacement in highly dilated hearts. In these cases, pathological anatomy teaches us that the fixation of the papillary muscles should be at the half-way point, or higher, of the ventricular cavity, without possibility of supporting myocardial contraction, greatly restricting any contribution to the cardiac systole and the importance of their preservation in mitral valve replacement surgery. 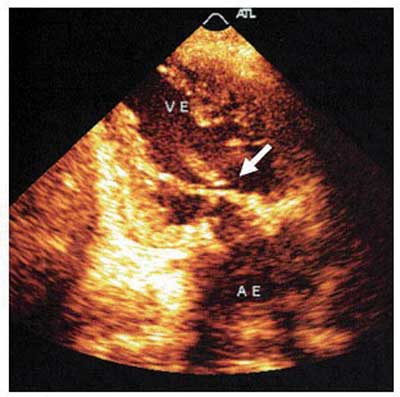 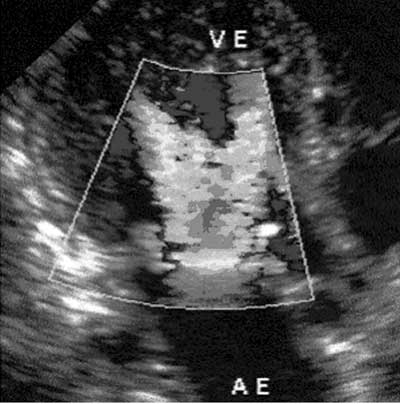 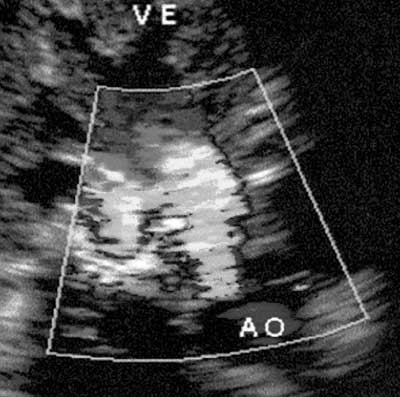 Fig. 4 - Diagram of the correlation between the types of papillopexy and potential for ventricular diastolic dilation (A - Normal, B - Parallel, C - Crossed) 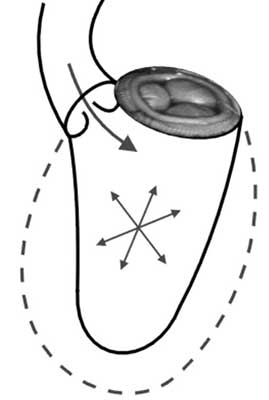 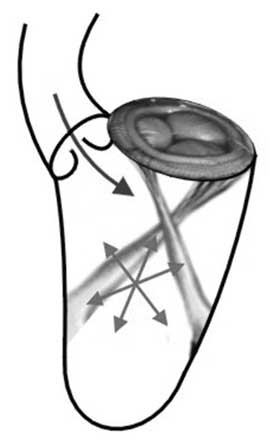 Fig. 5 - Diagram of the correlation between the ventricular passive dilation in aortic valve regurgitation and protection by crossed papillopexy

The current investigation has definitive practical limitations prejudiced by natural difficulties in homogenization of the multiplicity of inherent aspects of the clinical state of the patients and involved physiopathologic determinants, which also justify the differences in results and of interpretation in international publications. In general analysis, it is possible to conclude that the technique of crossed papillopexy allows mitral valve replacement with functional recovery and significant favorable atrial and ventricular remodeling.